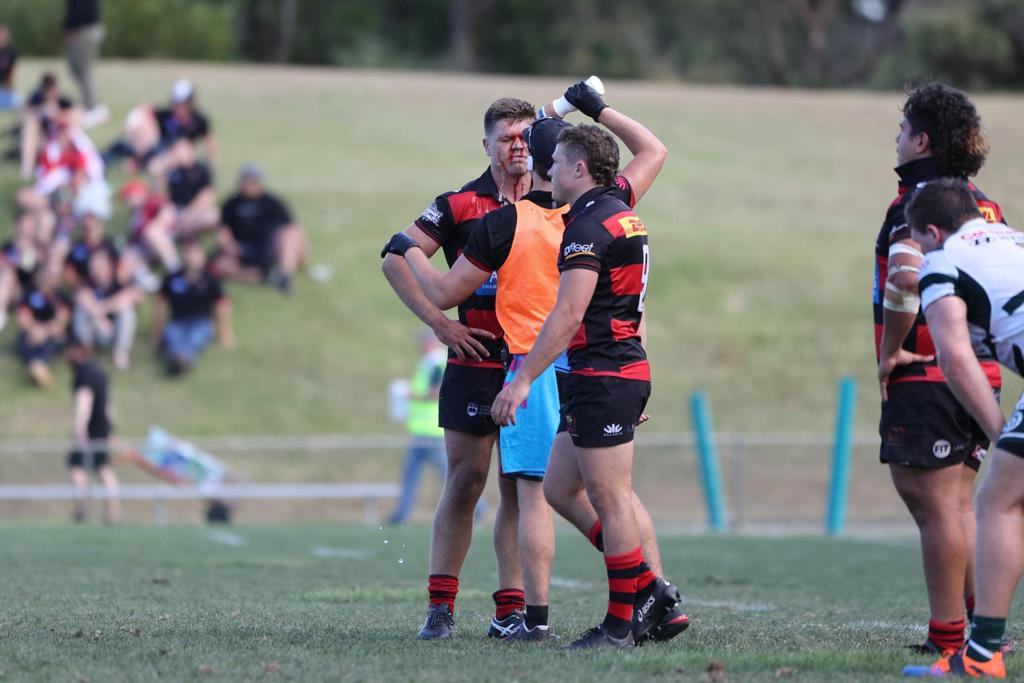 You may have heard more in the news lately about how sporting teams are managing concussions. It’s been a big topic in the medical the last 5-10 years and is now just hitting mainstream media. As first responders on the side of a sports pitch and also as the ones to get you back playing – Physios have also had their heads deep in this topic. As more research emerges, the medical profession is improving the way these injuries get reported, are managed in the short term and also making everyone aware of the extended return to play guidelines and rehab protocols that are essential for long term brain health.

Pulling the player up and telling them to get on with it is definitely no longer acceptable, and hasn’t been for quite a while. However, knowing when and how to return to sport is not as well known. It’s important to know some key symptoms to check with yourself or your kids – you may not know what’s significant to report as you get back to doing what you love.

Concussion related brain injury in contact sport and more importantly the long term effects of this has generated significant attention and we are now seeing some high profile cases come into the public arena, much like has happened overseas. While there is more research to be done to understand the long term implications of repeated concussive trauma, the growing evidence is forcing overdue cultural and legislative change among some of the major sporting and football codes in Australia. Concussion management is the biggest challenge facing sport in Australia and we can expect more changes at multiple levels to come into effect over the next few years as evidence emerges and practices change to ensure a safe playing environment.

Here are some ins and outs below about concussion

Let’s start with the basics – what is a concussion?
It sounds dramatic, but it’s a traumatic brain injury. The sudden movement can cause the brain to bounce around or twist in the skull, and that creates chemical changes in the brain and sometimes stretches and damages brain cells.

And how does it present?
Some people lose consciousness and memory, and it’s often followed by some nausea, grogginess and confusion that usually clears up after a few days…

Can you still have a concussion if you weren’t hit in the head directly?
Absolutely. It can also occur through a violent jolt for instance when your head is moved forwards and backwards or side to side. That can happen with a fall, for example.

And how do you know if it’s serious?
If there are severe headaches, seizures and vomiting, then the doctors may need to do brain scans to determine whether the injury is severe and has caused bleeding or swelling in the skull.

How bad is it for you?
A one-off event isn’t necessarily a big concern but these days the long-term consequences of repeated head injuries in sport are getting significant attention. One condition that comes up a lot is CTE or Chronic Traumatic Encephalopathy.

Chronic Traumatic what?
It’s a degenerative brain disease that stems from repeated head knocks over a number of years. There’s still some debate about this, but generally, research shows symptoms present like dementia – there’s cases of memory loss, personality changes and depression.

How do you know if you’ve got it?
It’s not easy… A definitive answer on whether someone has CTE can only be made after death. There’s no scan or test for it. It requires an autopsy to reveal whether the markers of the condition are present.

So is this a newly-found condition?
Not at all. The first diagnosis of CTE dates back to 1928. It was first found in boxers and was then known as dementia pugilistica (aka ‘punch drunk syndrome’) but it roared back into public attention in 2005, when a pathologist found CTE in the brain of an American footballer – former Pittsburgh Steeler Mike Webster.

I think I heard about that?
It might sound familiar because it was made into a movie starring Will Smith called – you guessed it – Concussion.

And CTE has been found here in Oz?
It sure has. The first case diagnosed here was former rugby union player Barry ‘Tizza’ Taylor who died in 2014 at 77yo. And last year, former champion Graham “Polly” Farmer was the first associated with AFL to have been diagnosed with CTE after his death in 2019.

Anyone else?
Other high profile cases include Aussie rules footballers Danny Frawley and Shane Tuck. Both men took their own lives and it’s thought their mental health struggles stemmed from the neurodegenerative disease. Similarly, AFLW player Jacinda Barclay took her own life in 2020. She was found to have suffered repetitive head injuries from contact sport.

That’s surely put some pressure on sporting codes…
It has. There’s a lot that is still unknown with CTE, but what is known is that those at greatest risk are athletes who play contact sports – like rugby union, league, AFL and boxing.

Let’s start with rugby union…
Rugby union lowered the legal tackle height worldwide in 2019. Reports say that led to an instant 28% drop in concussions. Medical staff/referees can also remove a player from a game the moment they see any signs of concussion. And in the junior ranks, there’s a Size for Age program, where juniors can be moved between age groups to suit their physical or mental development.

Didn’t I hear about some changes in the NRL too?
Yes. There are penalties for high contact and tackles in league – they’ve been in place for some time. At the start of this season, the NRL introduced protocols for dealing with head injury assessments (HIAs). But things really got heated in mid-May when 3 players were sent off and 14 players were sin-binned in a crackdown on dangerous tackles.

That would’ve created a stir…
It sure did. But Australian Rugby League Commission Chairman Peter V’Landys is making no apology for the crackdown. He said, “I want our players to be able to leave our game with all their faculties.”

What’s happening in the AFL?
The AFL has had rules and penalties to limit reckless high bumps and dangerous tackles for years. Earlier this year, it also updated its concussion guidelines – players are now sidelined for at least 12 days if they suffer a concussion, up from 6 days previously required.

Are CTE concerns just around heavy contact sports?
Nope. Cricket and cycling are 2 that have also moved to consider it.

But they aren’t contact sports…
No, but cricketers can get hit with the ball while batting, and cyclists can fall.

Ok, how’s cricket handling it?
The International Cricket Council in 2019 brought in rules to allow players who suffer concussions during a match to be replaced. Aussie Steve Smith was the first to put that into practice when he was hit on the neck.

And cycling?
A whole discussion was kicked off when Kiwi rider George Bennet fell during the Paris-Nice road race in March and hit the back of his head. The impact split his helmet into 2 pieces.

So why is this being talked about right now?
For one, protecting people is the right thing to do… But there are significant legal risks to sporting organisations. We’ve seen it in the US with the NFL (the American football league). A class-action lawsuit filed on behalf of thousands of former players in 2012 saw the NFL settle for US$1 billion.

What about here in Oz?
Several NRL players are or have taken a legal route.

What are organisations saying about protecting themselves from legal action?
Not a lot, but something that’s been talked about to protect the code from legal action is a concussion waiver. That has the backing of a couple of prominent names in rugby league like Phil Gould and Andrews Johns. Their general view is that it’s poor form for players to sue after retiring because footballers are – or should be – aware of the risks.

But there’s a lot that’s still unknown with CTE…
And the only way to find out more about the impact of concussion is through examining the brains of sportspeople with and without a history of concussion or other traumatic brain injuries.

It’s a serious commitment…
It is, but Dr Peter Brukner has described the issue of concussion as the #1 problem for sports throughout the world. Another expert, Dr Chris Nowinski says that while a small number of AFL players had been diagnosed with CTE, it’s just the tip of the iceberg.

So what’s the advice for parents/coaches?
There’s a government initiative on concussion run by Sport Australia, the Australian Medical Association and others. What they say is there’s a consistent and growing body of evidence that supports a slower rate of recovery in kids and anyone aged under 18yo – that means no contact sport for 2 weeks after the symptoms of concussion have gone.

But what about making sure kids aren’t concussed in the first place?
The focus on making sport safer seems to be in the hands of the sporting codes and administrators.

Right… Anything else in the works?
Funny you ask. Just this week, a world-first international study identified a new drug that could halt the progression of CTE. And there’s research happening around the world about how the brain reacts to repeated low-level blows, what that means for the brain’s chemical makeup and what can be treated and prevented.

So there’s a lot going on…
Safe to say, we’ll hear more about it soon…

This information has been adapted from here)

As Physios we are heavily involved in community sport and often work in challenging environments with limited resources. Physios are often the first contact practitioner and for concussion injuries and so it is essential that we have a good basic knowledge of the fundamentals of concussion injury presentation, management and return to play protocols to ensure the safety of our athletes in accordance with the latest research and guidelines.

If you would like to discuss concussion with one of our Physios, we would be more than happy to help call us on 99683424 or make an appointment online https://squareonephysio.com.au/bookappointment