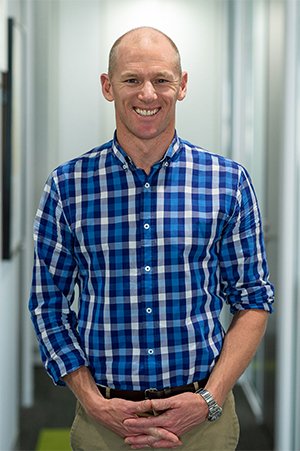 Campbell is the Practice Principal and Clinical Director. He has over 19 years experience working in Private Practice as a Musculoskeletal Physiotherapist. He completed his Physiotherapy degree in New Zealand and has completed a Masters degree in Manual Therapy at The University of Western Australia attaining the title of APA Musculoskeletal Physiotherapist. He has a special interest in treating patients with both acute and overuse sporting injuries from the novice exerciser to the experienced athlete. He has been the Head Physiotherapist at Northern Suburbs Rugby Football Club since 2009 and has been the Physio to the Australian Junior Wallabies from 2011-2016. Campbell is passionate about exercise and health and fitness and developing a team that can deliver a world class Physiotherapy service to the patients of SquareOne. In his spare time Campbell enjoys running, cycling and swimming and competing in various triathlons and ironman events and has competed in the Hawaiian Ironman on three occasions. He is a keen member of Balmoral Triathlon Club and Manly-Warringah Cycling Club and can often be seen out training around Manly and the Northern Beaches areas. He has two young children in Oscar and Coco and enjoys spending time with them.